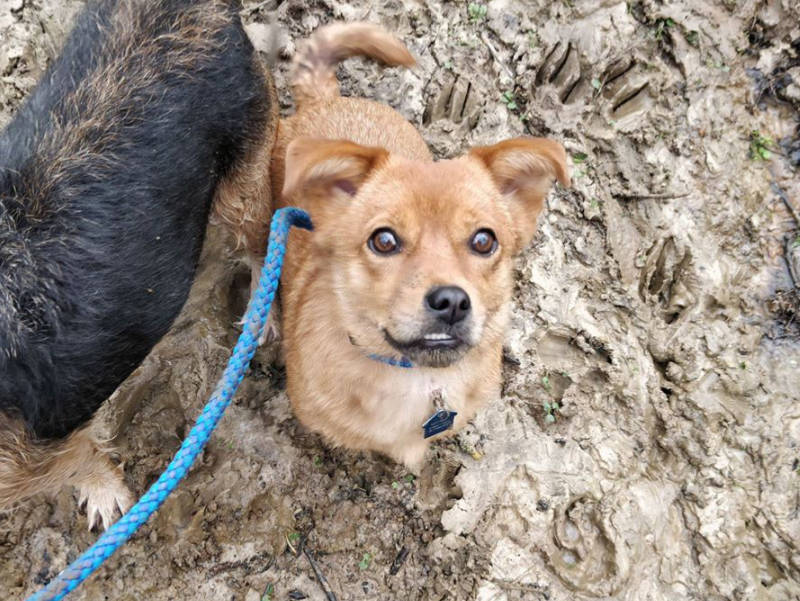 We have a sweet baby girl available for adoption!

Her name is Evie. She is a Romanian rescue, currently living in foster care in Hastings, East Sussex and patiently waiting for her forever home, who would love and adore her the way she deserves!

Evie is a former stray dog. She was found by a lady living in a Romanian village and adopted. Soon after, Evie left unsupervised in the garden – raided a chicken coop unfortunately to her owner’s disgust. As a punishment, she threw her in a sack, tied it up and drove to the Danube River to drown her. Thankfully, a passerby confronted the lady when she spotted that the sack she was dragging across the sand was moving and crying. Evie’s owner, in her anger, dropped the sack down and stormed off, leaving the passerby with Evie in her arms. Although this lady meant well and saved Evie’s life she could not take care of her. So Evie went to live with one of our Romanian volunteers in a yard full of other rescue dogs, waiting for someone to offer her a better chance.

Evie is around 3 years old, she is a mixed breed (maybe Chihuahua cross), she is of small size and looks like a weasel when she runs and plays! She is spayed, microchipped, has a passport, is vaccinated, de-wormed and treated against fleas. Evie loves people, although she might take a little while to warm up to you, treats are ALWAYS a good start in winning her heart. Once she gets to know someone, within a few seconds, she becomes their best friend, the cuddliest doggy in the world and loves attention, loves to be held and belly rubs! Evie also loves dogs, to some she warms up straight away and initiates play, to others – it can take a few minutes if they are a bit full-on, but she loves all shapes, sizes and personalities – she loves to play with other dogs, be in their company, share the bed/toys with them and eat alongside them.

Evie would be well suited to:

Ideally, Evie would need an active owner as she is full of energy – she can be a running partner, hiking/adventures buddy, also a couch potato in the evenings or on lazy days! We would prefer if Evie was adopted as an only dog but who could still socialise with other dogs daily – she is still in training for her history of being highly dog/noise reactive on lead (progressing beautifully – we can discuss further details on the phone/email) and general obedience (such as lead/food manners etc). With her energy level and need for ongoing socialising/basic training, Evie would maybe take up too much time in a multi dog household, so maybe an owner who could dedicate a lot of 1:1 time to her would be a much better choice. Evie needs an owner who is dedicated, commited and who has experience + knowledge about dog behaviour/basic training or even better if experienced with reactive dogs.

Evie is truly delightful to have as a foster dog, she makes everyone smile everyday and is really no trouble at all; she would thrive and reach her full potential with the right owner!

If you think Evie would be ideal for you, please get in contact and we can discuss further!